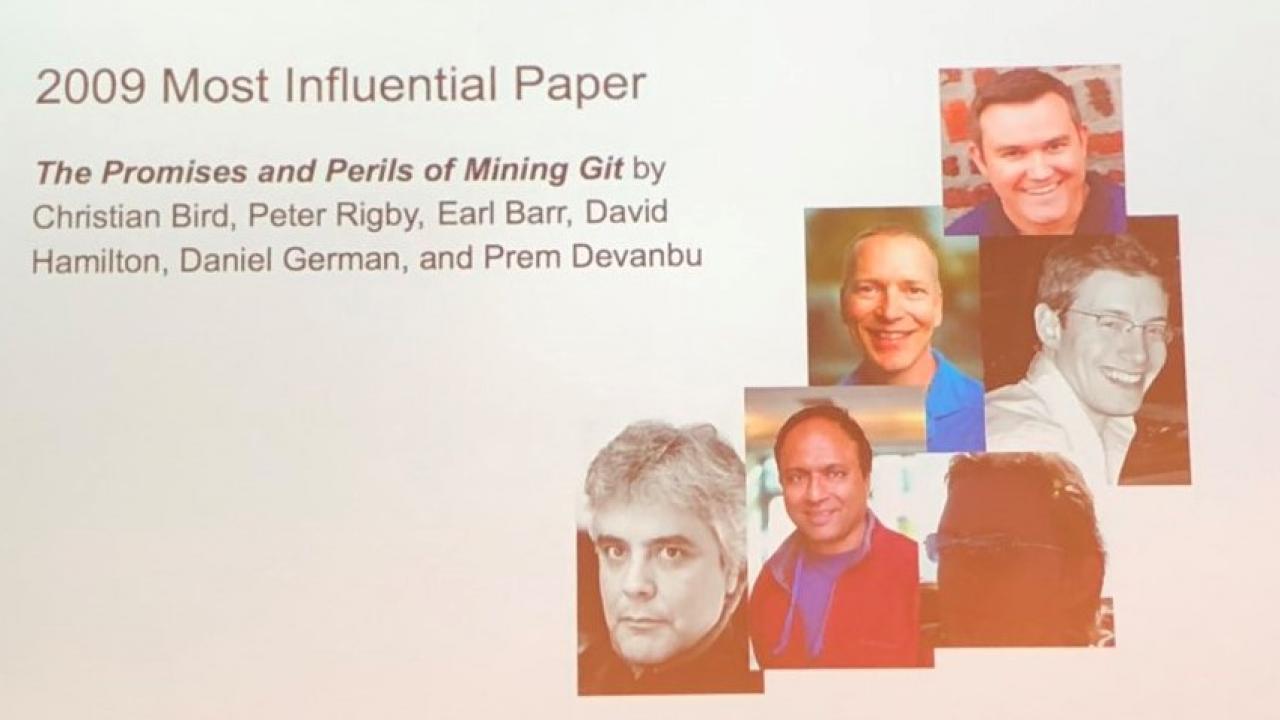 UC Davis alumni Chris Bird ‘10, Earl Barr ‘09 and David Hamilton ‘10 and CS professor Premkumar Devanbu received the 2019 10-Year Most Influential Paper award from the Mining Software Repositories Conference for their 2009 paper, “The Promises and Perils of Mining Git.” The award recognizes papers that have had a lasting impact on the software mining community.

The paper, led by Bird and Barr and co-authored with Daniel German and Peter Rigby from the University of Victoria, was cited for its “foundational contribution [that] enabled a decade of Git repository research across the SE community.”

“It’s a surprise what turns out to be your ‘most influential work,’” said Rigby, who was visiting UC Davis for six months when the paper was written and is now an associate professor of software engineering at Concordia University in Montreal. “At the time, we worried that it wouldn’t even get into MSR.”

Software mining researchers like Bird and Devanbu study how programmers work and how software evolves, by collecting and analyzing data from different versions of software repositories to see how they are built and where and how mistakes are made.

Version control systems are a key tool for this, as they track every code change in a software repository, including information like what changes are made, who made them and when. Git is a decentralized version control system, meaning that each developer has their own copy of the entire repository for a piece of software, rather than adding to a single, central repository.

Though Git is extremely powerful and offers the potential of very detailed historical data, changes can be hard to track. Due to decentralization, many copies of a repository can exist, each with slight variations. Git also allows users to rewrite version history, potentially erasing crucial data points.

“Not much was known about Git in the scientific community at the time,” said Devanbu. “It was the first paper to talk about the rich opportunities it provided while laying out the pitfalls.”

This is Bird and Devanbu’s third time winning an award for a durably influential paper. They were previously honored by the MSR conference for their paper “Mining Email Social Networks” in 2016 and together with professors Vladimir Filkov and Raissa D’Souza, they also won a “Test of Time” Award in 2018 at SIGSOFT FSE, the flagship software engineering conference, for a 2008 paper on social structures in software projects. The team will receive the award at the 16th annual MSR conference on May 26-27 in Montreal, Canada.