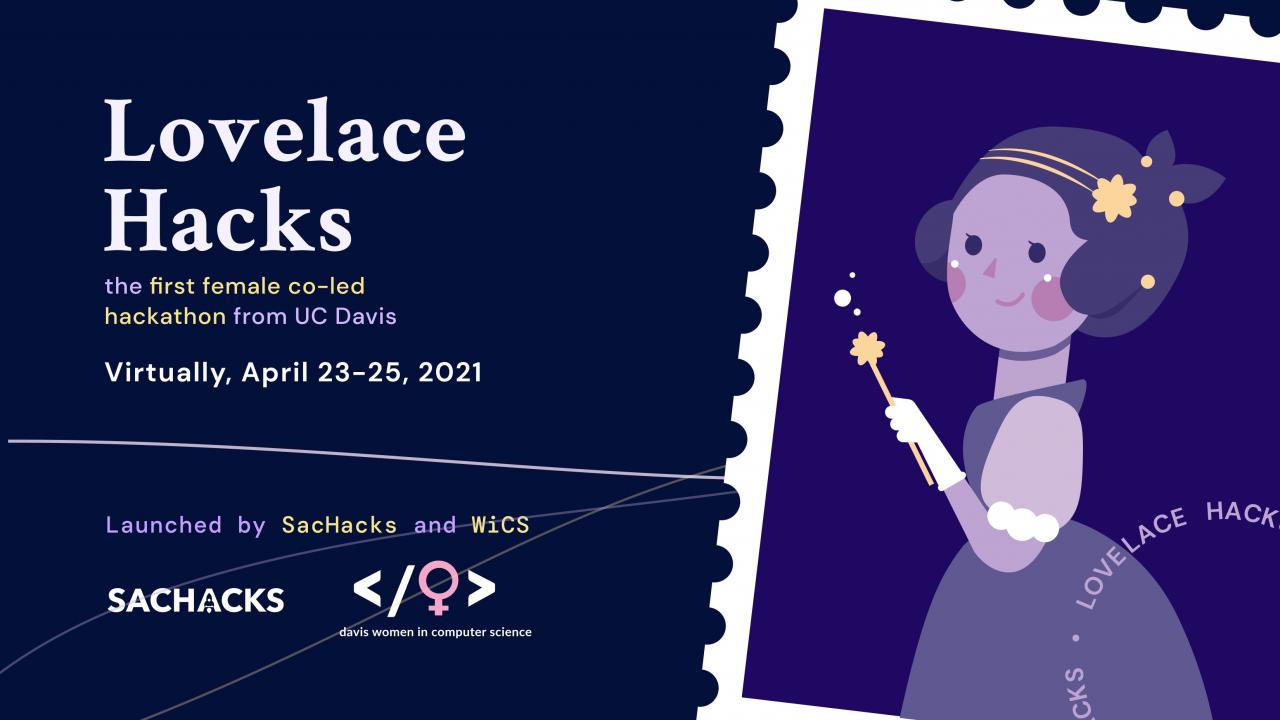 From April 23 – 25, Davis Women in Computer Science (WICS) and SacHacks co-hosted Lovelace Hacks, UC Davis’ first women-focused hackathon. This hackathon aimed to create a space for people of all majors, backgrounds and experience who identify as women and gender minorities to grow their interest in technology and data science. While all-women hackathons have taken root at other UC campuses, Lovelace Hacks is the first of its kind in the Davis and Sacramento area.

Similar to most hackathons, teams of students from UC Davis and the Sacramento region worked together for 36 hours to design an app from start to finish and submit it for competition. The virtual event also featured technical and professional workshops and gave participants the opportunity to learn about computer science and technology in a collaborative and comfortable project-based environment.

The UC Davis Department of Computer Science sat down with Jennifer Jeon ‘21, (B.A. design, cognitive science) and the co-president of WiCS and Derek Lee ’20 (B.S. computer engineering), executive director of SacHacks, to discuss the event and the importance of advocating for women and gender minorities in computer science.

The transcript has been edited for grammar and clarity.

Department of Computer Science (CS): Can you please tell us about each of your organizations?

Jennifer Jeon (JJ): “WiCS seeks to empower and support the community of women and gender minorities in computer science. Our club helps members grow their technical skills and professional relationships with recruiters and software engineers in the tech industry. We host recruiting events with companies, workshops where people can build their programming skills and community-building events where people can get to know each other.”

Derek Lee (DL): “SacHacks was founded to create a hackathon for the Sacramento region. California is a tech state, but one of the pillars of the college software community are hackathons and it was weird that our capital didn't really have one. Over the past two years, we have hosted multiple events and now we’re partnered with WiCS for Lovelace Hacks.”

CS: What is your vision for Lovelace Hacks?

JJ: “We wanted to create a space for women and gender minorities to explore technology, cultivate an interest or passion and just build, create, code and design without feeling uncomfortable. To this day, misogyny and imposter syndrome permeate the tech industry, which can make women and gender minorities feel unwelcome. It highlights the need to support them both in the industry and at UC Davis the importance of building a community where people can just get together, build and create without any of that distraction.”

DL: “Hackathons are already intimidating, but most are 70 percent male, and I feel like that would make it even more intimidating for non-males. This event takes all the scary stuff away and though it’s still a competition, we went for a tone of a friendly community event where people can embrace each other and learn. The concept of having a woman- and gender minority-focused hackathon exists everywhere, so I think it’s time Davis had one too.”

CS: Why is it called Lovelace Hacks?

DL: "We named the hackathon after Ada Lovelace because in a stereotypically male-dominated field, it’s kind of ironic that the first computer programmer was a woman. And if you look into the history, more than half of the people working on the U.S. military’s first computer in 1946 were women. One of our pillars is awareness not only of famous women like Ada Lovelace, but also the lack of historical knowledge.”

JJ: “We also wanted to make it an educational hackathon where people can learn about different female-identifying figures who have made an impact in the tech industry. We’ve really tried to show that in our marketing, where we highlighted a woman who made a significant impact on computing every day. Our goal is to bring awareness to women in technology who people can look up to and be inspired by.”

CS: How did this event come together?

JJ: "I think the idea was always in the back of our heads and my affiliation with SacHacks as a designer led to the collaboration.”

DL: “I conceptualized the idea in the CS department’s ethics class (ECS 188). We had one lecture dedicated to women in tech and the professor asked women in the class to volunteer their experiences. One thing that came up was that they felt weird about the lack of people that were non-male to talk to, which made in-person classes intimidating.

“That's something that I felt we could address with an event like Lovelace Hacks. If we can connect people online and help them make friends, they can have someone to sit next to in class when they do go back to campus. After the last lecture, I stayed and had a one-on-one talk with Professor [Patrice] Koehl about the idea to get his perspective. I then reached out to Jennifer and WiCS.”

JJ: “I felt like having a space like this was really needed and after talking with the WiCS board, we started planning. Derek brought this up to me in December, so I am really impressed at how quickly this was able to come together.”

DL: “Like she said, it's been pretty quick, so we needed as much help as possible to make this event happen. We have alumni and sponsors helping, as well as our keynote speaker, Sadie St. Lawrence. She is pretty big in the data science community, so it was really nice of her to volunteer her time.”

CS: How do you think this event went?

JJ: “I think given the timeframe and the constraints, it went really well. It was a relatively small hackathon, but people were still willing to engage and make the most out of their experience. A lot of people submitted projects that showcased what they learned, and it was clear participants were able to meet new people. So I would say the goal was pretty well accomplished.”

DL: “Of the UC Davis students who submitted a project, 63% said this was their first hackathon, so it shows that the dedication is there and that the event was helpful. It was also encouraging to see people try data science because a lot of people say they want to, but most don’t have that opportunity. We also had a lot of turnout for the keynote speech and people were very engaged in the Zoom chats, even if they just attended the talks. If they could learn something from any part of the event, that’s great.”

CS: What were some key takeaways?

DL: “The concepts and the core values are there, but now that we have more than a few months to plan, the next Lovelace Hacks should be more fleshed out and hopefully we can create more faculty support. Probably the biggest takeaway is to be adaptive, because we don't really know what the next event will be like. Data science is becoming an official major next year as well, so hopefully we can build on this as interest naturally increases.”

JJ: “It’s inspiring to see how much WiCS, SacHacks and Lovelace Hacks have impacted people and driven them to participate in community events. WiCS recently had an event and we promoted it in the Lovelace Discord and we saw 20 more people join our event. We would love to continue having a hackathon like this every year and build a community that lasts a long time. If we follow through with Lovelace Hacks again, I think we could make it an even stronger event because we’ll have more time to plan and really flesh everything out.”